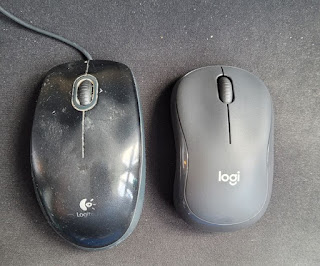 The debate is not wired vs wireless, but wired vs Less power|bandwidth|security

Cables can be a frustration at times for many people, so being without them feels so freeing, . . to a point.

To go without wires/cables for signal still requires power, and if you don't have a wire to provide that, you certainly have batteries involved that have their own frustrations to deal with.

Replaceable or built in rechargeable?

How fast are they drained?

Yes, there is wireless power transmission tech being developed, but:

The bandwidth you can put through radio (wireless communications) is about the same as a few strands of wire or fibre in a cable. And the space of radio waves is shared.  So if you try and pack a room full of active Wi-Fi sharing systems, you generally will get less bandwidth to each than if they were wired connections. Especially if there are many other nearby users of those radio frequencies. How many Wi-Fi Access Points do you see near you? You are sharing bandwidth with them and anything else that might be using those particular frequencies that you can't see, such as Bluetooth on 2.4GHz and microwaves that are really noisy in that space.

Security is typically less with wireLess.  There are so many more ways of intercepting wireless(radio) traffic, most without any indications of such an interception. Encryption can be defeated, it is anything but perfect. The end points of any wireless system can be readily attacked from a distance in a whole range of tactics in addition to any possible wired attack vectors.

Example:  With some USB dongles they can be used to take over the computers they were plugged in to.  When did you last update your dongle's firmware?
Is your dongle subject to MouseJack or KeyJack attacks?

Personal health, a potential issue with adding more radio waves going through your body and those you may care about nearby.  Radio waves are a form of Radiation. While not the really nasty ionizing radiation of fission of big atoms like Uranium, it is still energy that we didn't evolve with. We are already seeing evidence of harm from cellphone radio waves.

So where ever you can, a wired/cabled/fibred connection is generally more reliable, secure, energy efficient, lower cost (especially over product lifetime), less resources used to make and operate, less impact on the surrounding environment. While there are always exceptions, they are just exceptions to a rule, not an invalidation of this point.

Wireless things have their place, but like everything in life, there are trade-offs along the way.  Make them deliberately rather than letting marketing brainwash you down any particular path as they won't tell you the hidden costs or risks.

Wire - single strand of an electrical conducting metal. One is almost never enough

Fibre/Fiber - a single strand of optical fibre, usually plastic, that carries light as the signal medium.

Cable - a bundle of wires or fibres in a protective bundle. i.e what we usually see.

Posted by Konecny Consulting at 12:35 PM

Konecny Consulting
We are an IT Consulting firm with a focus of: Implementation and support of secure & stable systems primarily based on Micro Focus products, Documentation (writing policies, procedures, etc.), Bookkeeping, Instructional Design, and Training. We are problem solvers, who enjoy those challenges. More about us at www.konecnyconsulting.ca